Click on each small photo for a larger view.
Click your web browsers "BACK" button, to return here.

DVD's of this Mission in Nevada, playable on your home DVD player to watch on your TV,
are now available! They are also available on Blu-Ray Disc.

If anyone else would like any of these, contact me through the website and let me know.
They are $15.00 for the HQ-DVD 2 disc set.
They are $25.00 for the BluRay Disc set.
Shipping would be included in these costs if they are PO mailed out.
There is a Fallon, NV disc and a Dayton, NV discs of still pictures and videos.

Below is the original information, with further details about how this all began:

Over twelve years ago, In my Ex’s home I discovered a box with old “war department” and personal letters in a closet of his grandparents. When I got to the bottom the box I discovered ….. Yep that is correct a PURPLE HEART medal. No one in his family could tell me who this soldier was or why his grandparents had the Medal and Letters…. I took the box home with me that day and my journey began…. I spent countless hours researching who this soldier was…. Where he was killed, where he was buried …. Was he married? Did he have children? What I discovered was a heartbreaking truth. Yes he was married and had one infant daughter that he never got to meet. Her name was Peggy Arlene Eddington, born Feb 5, 1944. Her father Pvt. John F Eddington was killed a short four months later in Italy, on June 27, 1944. I was able to find that he was buried at Jefferson Barracks here in St Louis, MO. He was originally from a nearby small town called Leadwood, MO. I tracked his daughter to Nevada but never could find current residence for her.

A few months ago I finally decided to widen my search in hopes of finding his daughter before something happened to her.

I am proud to say …. IT WORKED!! After a lot of friends and complete strangers started spending time doing their own searches and information started coming together one lead, led to another …and within a few weeks I had found her grandson, which led me to her son and then to Peggy! … I was overjoyed!! See the thing I haven’t explained yet is I have spent years haunted by a TWO PAGE LETTER written on Feb 27, 1944 (Peggy being only three weeks old) by her father from Italy, saying how much her daddy loved her etc…. He was killed just a short four months after writing that letter. Peggy never knew this letter existed until I spoke with her on the phone. She has never seen her father’s Medal!!!!

My friends began trying to help raise money to get me to Nevada. One of my friends sent the story to our local television station for this “PAY IT FORWARD” segment they do…. Here is a link to the story and video of them surprising me in my office… Pay It Forward

I would love to meet up with some VETS or members of your organization ride along the day I actually go to deliver the items to Peggy at her home. (Heck even if anyone along my route would like to take the journey with me from Missouri to Nevada, how awesome would that be??)

I would like to be the one to personal hand her father’s letter to her but It would be MY HONOR to maybe have a WWll Vet or someone from the military actually hand the medal to her! She Lives in Dayton, NV near Carson City.

Does your organization have contacts that could help me organize something like this? I would very much like to make this a special day for a woman that never knew her father, never even knew these items existed until now… Email or call me if you think you want to help me make this a day her and her family will never forget!

I look forward to hearing back from you,
Thank you for all you do!!
Donna Gregory


We had some 75 motorcycles left Carson City Harley Davidson and traveled to Dayton, Nevada where a Purple Heart, a bronze star, a letter written to his then 4 month old daughter, and numerous other memorabilia items were presented by Donna Gregory and others, including our own Sugarbear, to Pvt. John Eddington's daughter, Peggy.

It was a very moving ceremony and all the local media were present, along with NBC News Mike Taibbi to cover the story for national NBC Television. Representatives from Sen. Heller and Congressman Mark Amodei's office spoke and presented certificates on behalf of our two fine Washington representatives.Two of the Patriot Guard Riders from Missouri were recognized, as they had accompanied Ms. Gregory the entire distance. Along the way, they were joined by PGR members in every state they crossed. Both Donna and Peggy sent their sincere thanks for us participating and making this event so special.

A special thanks to Robert Talbert, for not only doing a great job as the Ride Captain for Carson City, but he also picked up the duties for Dayton Ride Captain, Dan Rash who was called away on a family emergency. Robert did an outstanding job organizing both the ride from Lovelock to Carson yesterday and then coordinating the ceremony details today. Also, we owe a debt of gratitude to Colonel Steve Ronk for arranging all the indoor ceremony details.

We appreciate all the support we received from the VFW Riders, American Legion Riders, Ghost Soldiers, and the Combat Veterans plus all the many other fine veteran groups that travelled from other areas including Susanville, Truckee, Alturas California, Wendover Nevada plus a PGR Assistant State Captain from the Las Vegas area. I salute all those that made this a very memorable occasion.

Standing for Those Who Stood for US,
Joe Mastroianni
Northern Nevada Assistant State Captain

Three of us from southern Nevada made the trip up for the Purple heart event. Dennis who rides the yellow tweety Bird Honda, and Rob who somehow got up at 3 AM to make the event. All in all, it was a very nice 1300 mile loop.

I have to tell you the people up north did an absolutely wonderful job of organizing this special ride and presentation. It is very obvious that a lot of thought went into this, covering every aspect from start to finish. The ride for us started in Wendover with some dozen bikes along with Donna and company and grew to some 50 bikes by the time we made it to Carson City. Saturday we all met at the Harley dealer and made the trip to Dayton. The line of bikes and cages had to be a half mile long. The police escort insured a smooth ride to to the event. It was wonderful to see all the Navy Cadets taking care of everything from directing parking to handling the color guard duties. A great number of organizations were represented making the presentation that much more special. Then Donna got up and by the time she was done there were few dry eyes in the hall. After her presentation to Peggy, the guys made a number of other presentations to her showing that they not only organized the event to the original plans, but took it to a much higher level. Research showed that also a bronze star was issued to Pvt Eddington. They really did a very professional job in putting this event together. I really enjoyed meeting the people up there. 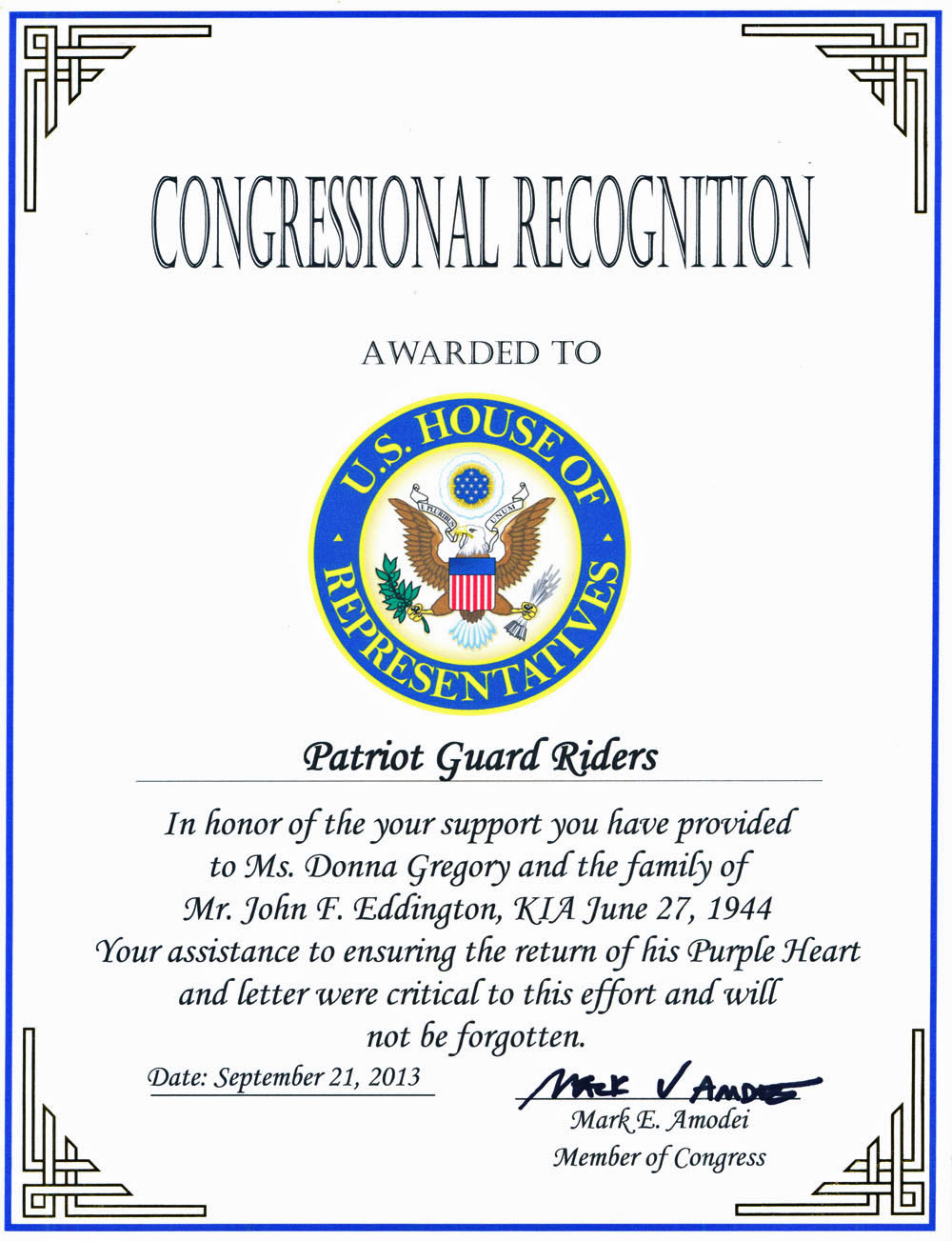